My brother Sean once had business cards made up for my father: John F. Henahan, World’s Foremost Authority.  He laughed as hard as the rest of us.  It is the Henahan way, I think, to want to learn everything and be an expert.  I recall one of my brothers sitting around on a Saturday afternoon reading the dictionary, just for the heck of it, just to learn.

My dad was a trendsetter, working from home from 1972 or so, before it became cool.  When he began this process, he also began to cook, and became the world’s foremost authority on cooking.  His foray into cooking had a major impact on all of us, I would say.  At the very least, I can pull ahead in a game of trivial pursuit or in a crossword battle by knowing that Craig Claiborne was food editor for the New York Times. We all developed an appreciation for gourmet food, and picked up a few tips along the way.  I have probably been the biggest disappointment, sometimes only being able to apply his tips while frying up the ground beef for the Hamburger Helper, but occasionally I would ask for his help.

As I was looking for a recipe to submit to the St. Mary’s 2013 cookbook, I came across these three recipes — each one of them with truly LOL moments…sometimes not until the last 5 words of the email.  Please read through them let me know how you do….And at the very least, have a laugh at my expense, courtesy of the World’s Foremost Authority.

Not having a lot of confidence in me, my father makes another suggestion.  This is delicious.

This chicken is simple, but really, really good.  Crispy skin, juicy meat. I guarantee you will receive rave reviews.  I have. 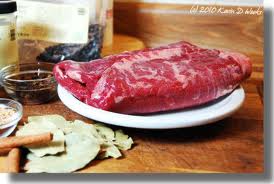 I really find his writing of the recipe the most rewarding part of this.  Based on his estimate of my abilities seen late in the recipe, I did not try it. But I will, sometime soon and will post my results.  Please give it a try yourself! He doesn’t say if the meat is cut up or not, I’m saying yes, but I would imagine not cut up is possibly OK. Use your judgment!

beef with or without0001