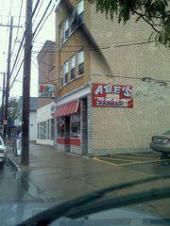 Needed to write a restaurant review for Writing class.  Here it is.

Because I had to drive to Maryland Wednesday afternoon for a seminar on Thursday, I invited my husband to take me out to lunch at my favorite Wilkes-Barre restaurant: Abe’s Hot Dogs on South Main Street in Wilkes-Barre. Advertised as “The One and Only,” it is at the center of a great, long-time debate over which is “The Real Abe’s,” or “The Best Abe’s,” and after sampling all of them in the area, I say this Abe’s is the best. What makes their hot dogs the best? I’m not sure, but I’ve heard it’s the Berk’s hot dogs. And of course there’s the great chili sauce. That, however, is an essay for another day.

With ominous skies upon us, we were happy to find a parking spot right in front and we stepped from one of the worst blocks in Wilkes-Barre into a wonderful slice of Americana. A warm welcome from one of the owning brothers stationed, as always, at the sizzling grill, and the woman who always stands besides him, made me quickly forget the drug and crime-infested South Main Street. The diner-style booth seating, the chrome-plated circular counter seats, and the type-written menus take me even farther from 2012 Wilkes-Barre to what feels like 1964.

A young friendly waitress greeted us before we were fully seated and we gave our order without looking at the menu: Two “with” for Chris, and one “no onion” for me, a bowl of bean with bacon soup for Chris, and a cup of vegetable noodle for me, diet coke to share. Most times I treat myself to a 25-cent bag of Wise chips, but Chris and I are locked in a fierce weight loss battle, which I’m sorry to say, he is winning, so every chip makes a difference.

The food was presented in less than three minutes during which time the owner and his sidekick greeted another six or seven diners, and sent another four or five on their way with to-go orders.

As always, the hot dogs were perfect: hot, just the right amount of chili sauce and yellow mustard, and a great steamed bun. Chris thoroughly enjoyed his bean with bacon soup. My vegetable noodle soup was so-so; it seemed that the carrots were canned and, while piping hot, the soup was a bit bland. I know. Was I really expecting a great vegetable soup at a hot dog joint?

We were out the door in less than 25 minutes, without feeling rushed, and in fact renewed a friendship with “Bob” who was getting 10 “with,” to go for his work crew. Our total bill, including tip was $10. Even better than the food at a great price was the chance to spend time with the best looking attorney in Wilkes-Barre.

After a rain storm blew through, I got on the road. As I gunned it up the on-ramp at Blackman Street, I was greeted by an incredible burst of sunshine, blue sky and a a rainbow breaking out from behind the clouds, as if had been tucked away waiting for its grand entrance. As I marveled at the spectrum of the rainbow, ,I marveled at the full spectrum of my lunch date. The sights, the sounds and the smells of great food, the warm feeling of great company, all tucked away in a dingy old building in the scariest part of town.